A petition calling for the UK to get an extra bank holiday if England win Euro 2020 has smashed its 100,000 target.

The Three Lions secured their place in the final after beating Denmark 2-1 at Wembley on Wednesday.

Harry Kane scored a rebound from a penalty kick, taking England to its first major final since 1966 when Bobby Moore lifted the World Cup.

Now a petition for an extra Bank Holiday to celebrate the potential win has achieved more than 300,000 signatures.

This means that Parliament will have to consider the request, which could be debated in the House of Commons.

The petition reads: “Sunday 8pm is a difficult time for families to plan to be together for the event – knowing we have an additional day off the next day would significantly help this.

“Furthermore, a historic win should be celebrated.

“It would be expected for the winning team to parade the trophy, and a Bank Holiday would be a perfect time to do this.

“Also, English people would naturally want to continue to enjoy the win, giving the retail and leisure industry a much-needed opportunity to make up lost revenues.”

Petition for Monday to be an immediate Bank Holiday if England win Wednesday night. 🏴󠁧󠁢󠁥󠁮󠁧󠁿🍻

Boris Johnson hinted that a day off could be on the cards if Gareth Southgate’s side triumphs against Italy, saying: “Let’s see what happens”.

Asked about a possible Bank Holiday if England win, the Prime Minister responded: “I think that would be tempting fate, let’s see what happens.”

Previously he tweeted: “Tonight England played their hearts out.

“What a fantastic performance from Gareth Southgate’s squad. Now to the final.

He was immediately faced with demands for an emergency Bank Holiday if England win on Sunday.

One fan said: “Get an emergency Bank Holiday in Boris lad.”

Another added: “Time to declare a public holiday on Monday if we win.”

Chancellor Rishi Sunak also refused to rule out a last-minute Bank Holiday on Monday to mark an England victory.

Meanwhile, there are calls for Southgate to be made a Sir if he becomes the first England manager since Sir Alf Ramsey to win a trophy.

Players like Raheem Sterling, who already has an MBE, could also be in line.

Southgate would make history if he steered England to their first-ever Euros triumph on Sunday.

If knighted, he would follow in the footsteps of Sir Alf, who led the country to victory against West Germany in 1966. 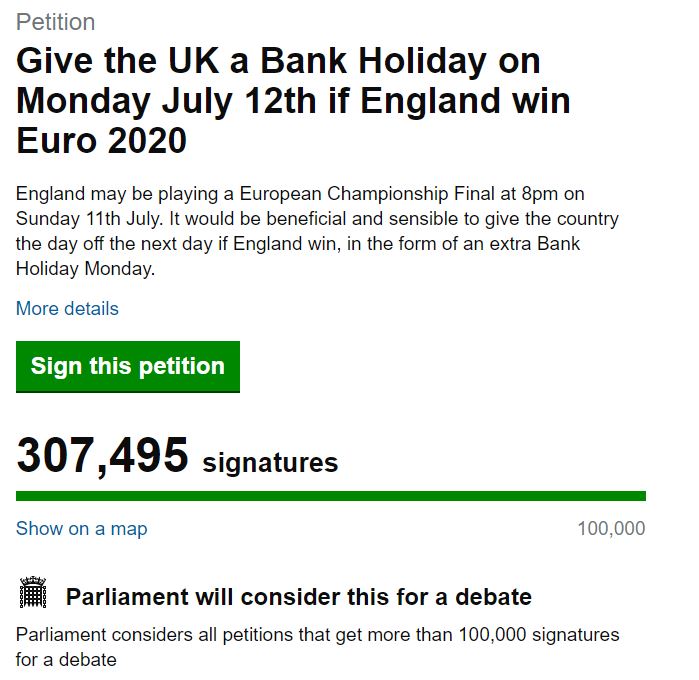 England fans also want a statue of him to go up in his home town.

They launched a petition in his honour during the 2018 World Cup in Russia where England also made the semi-finals.

It reads: “Gareth grew up in Crawley… and we believe the council should recognise his achievements with a statue of the man himself!”

The team face another two charges, one for England fans booing the Danish national anthem and another for the crowd setting off fireworks.

A statement from UEFA  said: “The case will be dealt with by the UEFA Control, Ethics and Disciplinary Body (CEDB) in due course.”

Will you be signing the petition?

Swipe left and right to jump to a related article