Uncategorized
elon musk, entertainment
No comments on Mr Beast Asks If He Can Be Twitter CEO, Elon Musk Replies

Mr Beast Asks If He Can Be Twitter CEO, Elon Musk Replies

YouTube star MrBeast has asked if he can be the new Twitter CEO after Elon Musk announced that he is stepping down.

On Sunday, the billionaire tweeted asking for people to vote if he should remain as head of the company or not. He promised to abide by the results of the poll.

By the end of the day on Monday, when the poll closed, 57.5% of votes said he should step down.

The billionaire then tweeted:

“I will resign as CEO as soon as I find someone foolish enough to take the job! After that, I will just run the software and servers teams.”

MrBeast aka Jimmy Donaldson has now asked if he can be the person to replace Musk. The YouTuber tweeted:

To which Musk responded:

“It’s not out of the question.” 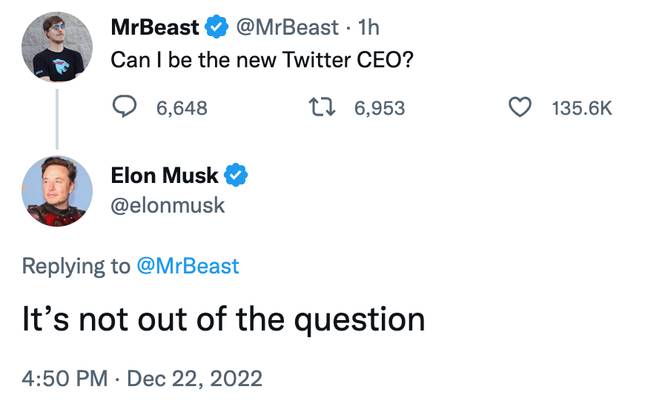